COMA has mounted a small exhibition on the theme  ‘ … introduced ‘  relating to the impact on our environment of imported weeds.  The painting size is restricted to 10 x 12 inches because of the limited space.


This exhibition will be part of “Weed Week” - observed throughout the Shire. Three local film makers are putting together short films themed on weeds and there are a few workshops planned on weeds – painting of and weaving with weeds maybe … and all will be held at - and promoted through - the Maleny Library.
The opening is next Friday night, but the exhibition can be seen by clicking HERE
My small contribution is...
... and I believe that it's already SOLD.  I'm delighted.
Patterson's  Curse is toxic to most grazing animals and is Australia's worst broadleaf temperate pasture weed. The weed is native to Mediterranean Europe and northern Africa and was introduced to Australia in the 1850s as an ornamental garden plant.
It reduces pasture productivity and is toxic to livestock and It degrades the natural environment by crowding out and suppressing native vegetation.
Despite this, from an artist’s view, the brilliant purple of paddocks covered with the weed are an absolute delight to behold. My childhood memories of life in the Riverina are coloured with this gorgeous purple. 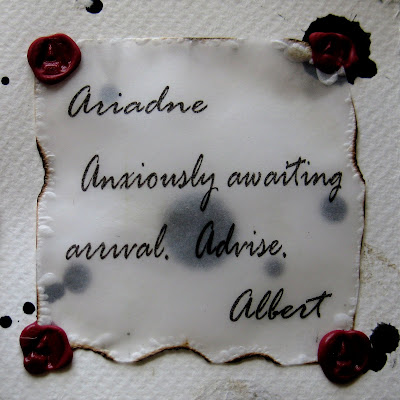 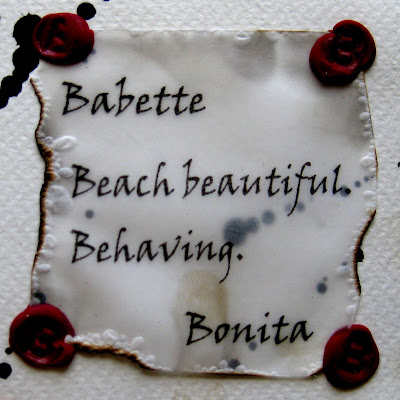 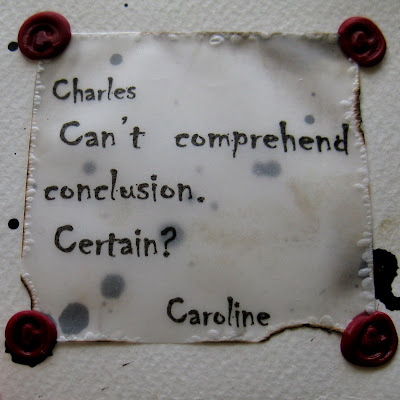 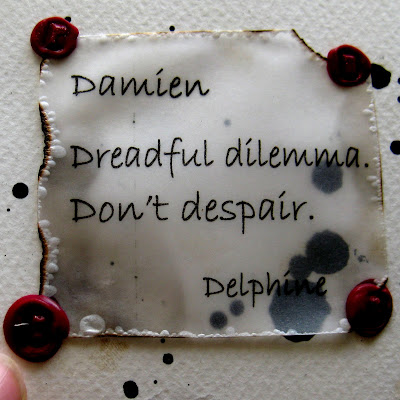 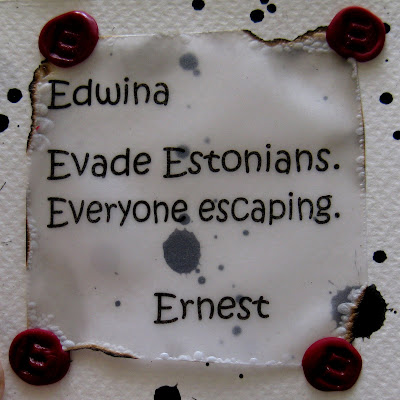 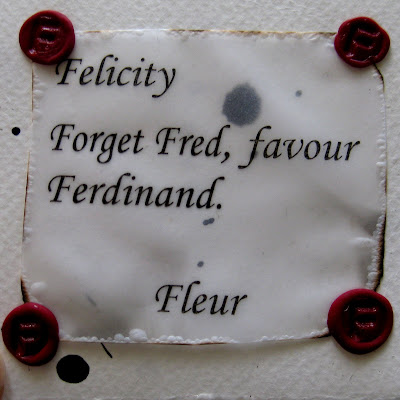 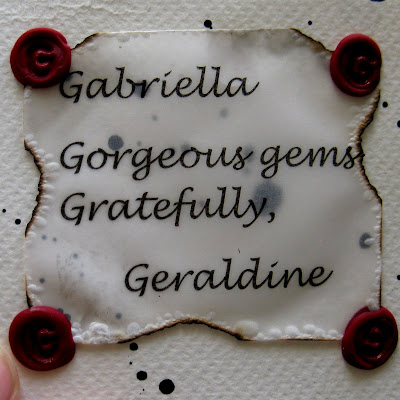 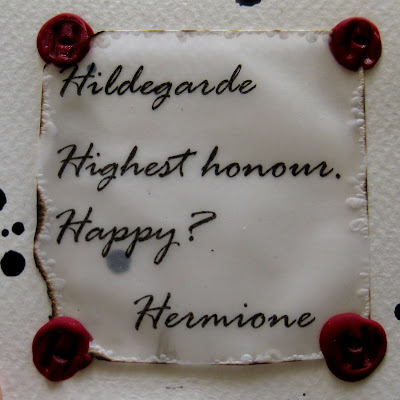 Hope Fiona approves.  I'm enjoying this.
Posted by Jo Murray at 5:38 AM 6 comments:

Recently I was involved in a 'postcard swap' run by KAT SLOMA , a photographer from Oregon USA. I dutifully made five postcards, with photos of recent work on the front, and was rewarded with five return cards from different people PLUS one from Kat herself. Each postcard had a different message on the back, some with interesting quotes.  A great way to see more 'stuff' and connect with creative people on the other side of the world.

Loved the cards, and the quotes.  I was thrilled to connect with these talented people and see more work on their web pages.  You can too by clicking on the links... (coloured names for those new to the concept).....  or the following box.

What a weekend!!!!  I've had an extraordinarily creative two days with PETER GRIFFEN a contemporary Australian artist.

His object was to make us get in touch with our 'inner child'.  Sounds easy right?  NOT!!!  We are all bound by our past experience.

Peter began his first day by showing us how to take 'a line for a walk', in the immortal words of artist Paul Klee. 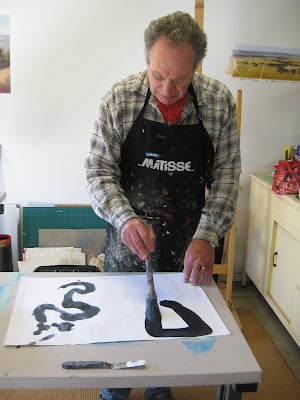 From this seemingly simple beginning we began our journey. Someone in the group called it the journey of the DEAD.  Not as macabre  as it seems.... Decorate, Echo, Analyse, Destroy ... then do it all again.

There will be some images in this blog that, for the life of me, I can't identify as coming from a particular person in the group, so hope I'm forgiven for that.  There were works all over the floor, tables, on easels... everywhere. 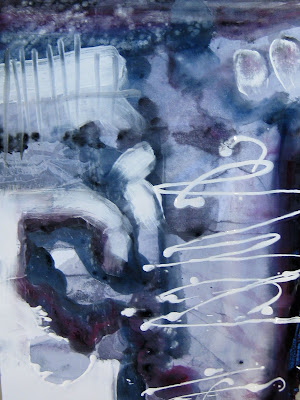 We added colour to our 'lines' and it took off from there.


I was lucky to have a few friends in the group.  Janet was one of the first friends I made when I first moved to Caloundra, with her daughter Felicity... and Susanne, one of a group I meet with for lunch each month.


Peter was very generous with his 'secrets' and during breaks we were treated to an analysis of some of his work. 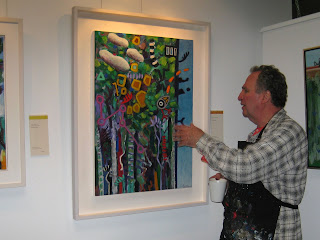 The second day we were to incorporate what we'd learned previously into a 'still life'.  BANG! Back we were, confronted by tradition, and desperate to avoid the obvious. 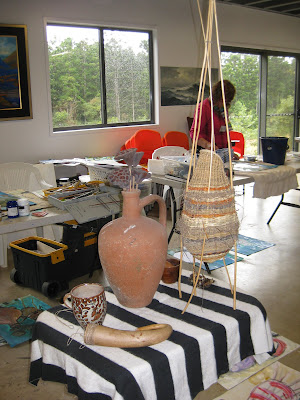 We could use part of, or all these objects... a pot, a mug, a woven basket, a mortar and pestle, and a penis gourd. 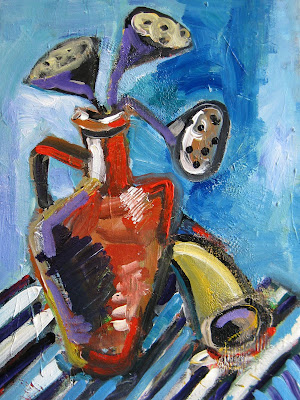 I think I missed the whole point of 'abstract' as this is hardly so, but the lessons I learned will be analysed at my leisure, and definitely enhance future work.

We were a merry, and slightly tattered little group (that's me on the floor - my favourite place) 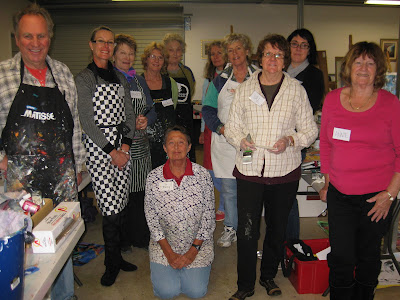 Back To My Weekly Collages

I'm back to my routine... almost.  This week's Scrapiteria theme is 'Animal, Vegetable, Mineral'  As I seem to be still influenced by Central Australia here goes.

I guess it's a comment on what the 'goldseekers' are doing to our landscape.  Greedy pigs with their snouts in the trough, searching for the golden apple.  Although an apple is not really a 'vegetable', in the sense of the brief it works for me.

Will we stop selling our country to overseas mining companies?... pigs might fly!

Am this weekend at an abstract workshop with Peter Griffen.  Am having a ball AND taking photos.  Will get to post them shortly. 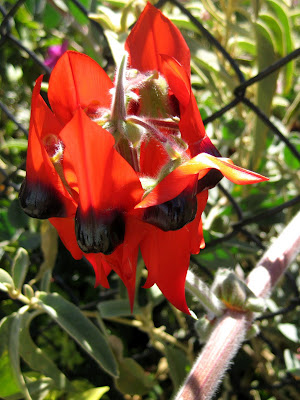 It is such rugged and beautiful country that it is difficult to convey without professional cameras, but who needs to lug heavy equipment when climbing over all this.
This was a VERY tiny precis of our first day.  We did sooooo much more.
Posted by Jo Murray at 7:55 AM 3 comments:

There is a saying - "Always a bridesmaid, never a bride".  Hope it's not true.  I have a painting in the Queensland Regional Art Awards

When I saw my work on the site  thought I was a finalist, but it seems that I am not, and that all of the paintings on the site are ALL the entrants. I'm in good company too, with some of my friends also there.

More info and YOU CAN VOTE on this site for the people's choice.

Last Views Of The Outback

G'day everyone in Blogland... I'm back.  While I have an enormous number of images I'd like to share with you, I also have the washing, shopping, cooking, and arranging my next few weeks busy schedule to attend to.  However I can't keep you waiting in suspense (at least I hope you are), so have quickly looked at our last day at Litchfield National Park, just outside of Darwin. 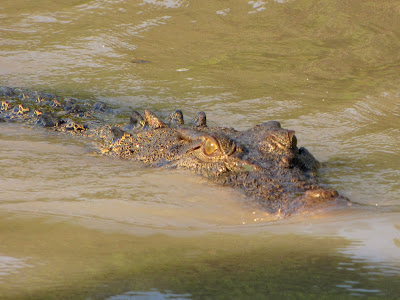 We spent much of the day cruising croc infested rivers... 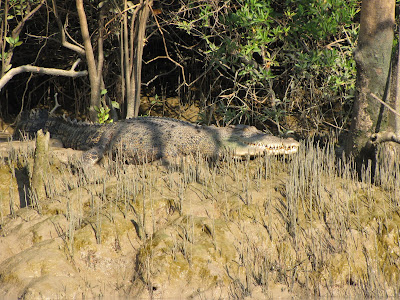 ... where these prehistoric creatures virtually littered the banks... 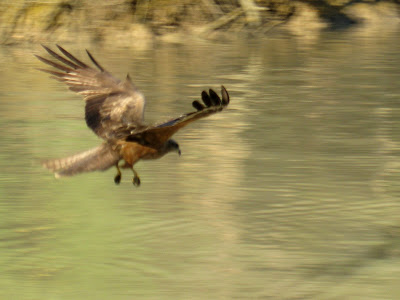 ... and predatory birds, like this Whistling Kite, hunted for food.

When we'd had enough of that it was time for champagne and prawns, on top of a hill overlooking the amazing landscape, and watching this spectacular sunset. 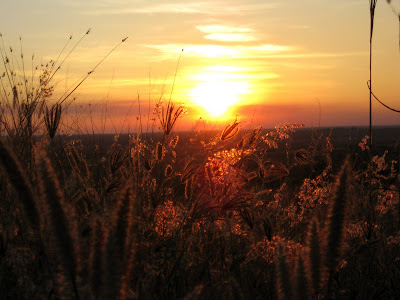 I just loved the way the setting sun reflected on the grasses.

Will eventually get the many photos sorted and share some of the many highlights with you.  Lots of painting inspiration for me!!!

Thanks to my computer savvy husband, I can actually share a small part of our adventure with you. Richard has his laptop and has managed to tear himself away from it so I can satisfy my blogging urges.

No wonder inland Australia is called the 'red' centre.

We have walked miles, and climbed enormous heights.  I have taken sooooo many photos of red rocks, chasms, gorges, etc. that it will be difficult to choose, so will only give you a small sample until I get home.

Naturally the most important places we've visited must be included.  Uluru (previously Ayers Rock) is a very sacred area to the local indigenous people. Climbing the rock is discouraged, but that doesn't stop the most intrepid, young, and fit tourists from giving it a go.  Mostly they are foreign tourists, as Australians are a little more sensitive to the wishes of the local people.

Another important sacred site is Kata Tjuta (previously the Olgas).

Leaving one of my favourites 'til last.... this photo emphasises the absolutely amazing colours of the landscape.

Until I get more computer time, this will have to do.  Stay tuned.

Here's the Summer Of Colours compilation... my final post for a few weeks. One image from each colour:

RED:
PURPLE:
ORANGE:
I've surprised myself!  A reasonable sample of the range of things that I do.

See you in a couple of weeks.

It's true... I've become addicted to my blog.  Here I am,  packed and ready to go for my holiday, still finding more stuff to post.  Just HAD to share with you some paintings by my favourite Australian artists that were inspired by the places I'm off to visit.

I love all these artists, and their works, and hope I'll be similarly inspired.
Posted by Jo Murray at 6:04 AM 8 comments: